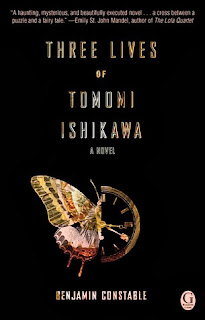 It had been a long time since I read a really good mystery book, so I was quite excited when given the opportunity to review this novel. The book starts with Tomomi and Ben in Paris, going about their every day average business. Ben’s life is utterly turned around when he receives a letter from Tomomi: she has killed herself and has an adventure for him. After a long healing period filled with disbelief, Ben decides to take Tomomi up on her offer of adventure. Uncovering the mysteries of Tomomi’s short life, Ben travels throughout France and to the United States of America.

What stood out to me most about Three Lives of Tomomi Ishikawa was how well Constable completely grasped the friendship between Tomomi and Ben. When Ben is reflecting on his experiences with his late best friend, it was easy for me to compare his stories of Tomomi to stories with me and my good friends. The strength of writing made the book very difficult to put down, as I wanted to continue to watch the friendship grow as Ben continued to learn more about his friend.

In his travels to solve Tomomi’s mystery, Ben meets several other fun characters and the reader is even introduced to his cat, Cat, whom no one else can see. The book is filled with friendship, trials, attempts to conquer fears, mystery, and there is a little violence thrown in there, as Tomomi’s secrets begin to unravel. I would recommend this book to anyone who likes a story that fits like a puzzle; the pieces gradually come together as the story unfolds. Three Lives of Tomomi Ishikawa is for adults, who enjoy mysteries and stories of friendship and loss. Benjamin Constable has truly written an entertaining book that teaches you about friendship all over the globe.