REVIEW: GIRL IN THE ROAD 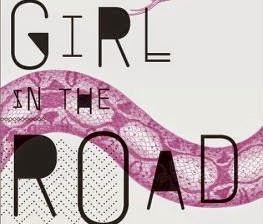 The Girl in the Road is a haunting, candid, and multi-layered novel. Beginning at first in a rather realistic fashion, Byrne quickly moves into captivatingly baffling and surreal territory. The Girl in the Road is to be read and re-read and digested for long afterwards, the meanings of the events and relationships to be left for discussion and rumination. It's a novel of ideas, love, loss, and much more. Yet the premise begins rather innocently and simply.

We meet two entirely different girls living in two entirely different circumstances. Meena is a twenty-something rebel who lives in futuristic India and makes her way to Ethiopia across a dangerous and prohibited metallic hydrogen Trail. Mariama, a young and innocent Haratine girl, is also a futuristic heroine journeying to Ethiopia. However, she is slightly in the past and her journey is much different, though no less trying.

The Girl in the Road alternates between the stories, predictably beginning to intertwine as the novel progresses. However, the destructive events and blurring of realities create an incredibly rich narrative that ultimately results in redemption and transcendence. At the same time, The Girl in the Road is equally terrifying in its truth and its horrors. Rape, adultery, murder, child molestation, and other graphic scenes occur, yet it never seems gratuitous. Instead, it highlights our hypocrisies as humans and the simultaneous failure and magic of memory and imagination. What define morality and reality, exactly?

Byrne's creation is incredibly sensual, evoking vivid, exotic scenes of India and Africa. Her command of the vocabulary and aesthetic are totally present from the first page and belie her immense attention to detail and phenomenal research. Yet Byrne’s true magic is her creation of a futuristic framework which is spectacularly expansive and convincing. Her creation of a strange mythology and network of symbols throughout the novel is equally as masterful yet subtly enigmatic. It is difficult to leave this universe, where a way of life is so richly imagined, despite its harsh realities.

The Girl in the Road is a highly recommended read. However, it should be approached with caution. It is not a novel that is necessarily easy to read or comprehend, and it is sure to vehemently polarize readers. The Girl in the Road is mystifying and full of discovery; unsettling, brilliant, repulsive, yet ultimately engrossing. It is a bundle of intensity and contradictions. Like life itself, The Girl in the Road is perhaps equally as idiosyncratic, meaningful, exhilarating, and breathtakingly eye-opening.

Mike Fan is a Canadian classical baritone. Mike plays five instruments and speaks three and a half languages. He holds degrees in piano performance and biomedical science, but it was obvious from an early age that music would win out. On the literary side, Mike wrote 365 sonnets in his teens and writes for his poetry blog http://someturbidnight.blogspot.ca. Follow @MikeZFan for Mike's adventures, musical and otherwise.
Posted by Bookshelf Blogs at 9:40 AM