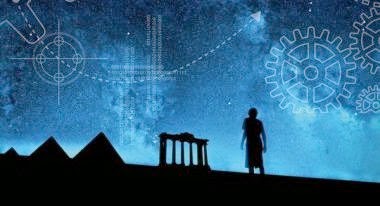 Mitchell Stephens' Imagine There's No Heaven: How Atheism Helped Create The Modern World is another superbly written and conceived discussion of Atheism, very much in line with the recent appearance of several books by the pundits of atheist thinking like Richard Dawkins, Sam Harris, and Christopher Hitchens.

Stephens' pungent and eloquent style allows him to retain great clarity in discussing this very contentious subject. His characterizations are finely nuanced and there is no sign of any cavalier attitude or sense of superciliousness or assumed superiority. Indeed there is less in this new study of gleefully throwing unanswerable squibs at the beliefs of religionists, that has been the wont occasionally of Dawkins, Harris, and more recently PZ Meyers. But such challenges do also accumulate as the various thinkers and their arguments are considered in their subsequent perspectives throughout history.

Stephens keeps his cool by structuring this new and very informative study on a cumulative articulation of the historical buildup of atheistic reasoning since its earliest traces at the dawn of Greek Philosophy, identifying many of the original framers of the mindset starting with the skeptics. Many examples of atheistic arguments have had to be re-constructed from ancient debates that resulted in an official vindication of spiritual belief, and thus the condemnation of the atheistic author, frequently resulting in his removal or death.

Although he does not dwell on this issue, it is clear that the further we go back in the history of these dissenting atheistic opinions, the more dangerous it was for any individual to be harbouring them. It took the buildup of some sense of tolerance on the subject in any given society to happen before any kind of meaningful discussion could take place. The issue with tolerance becomes a crucial theme here.

Stephens begins to identify virtuous and vicious cycles of historical-social development  that impacted the development in understanding and discussing unbelief. Either a given society was interested in learning, observation and rational discussion, which allowed atheistic ideas to flourish, or a society was closed-minded, authoritarian and ideologically religious which was not only dangerous for such ideas but for the individuals having them.

Although so much ink has recently been spilled over the ideas about belief, even in how belief itself works, Imagine There's No Heaven manages to come up with fresh material and fruitful discussions that help in understanding some complex issues. Stephens' primary position that skepticism of a supernatural reality or afterlife comes from a positive assessment of life and enjoyment of being alive, (which he calls Anacreontic after Anacreon who first articulated this concept : "Eat, drink, be merry, for tomorrow you may die…"), avoids the characterization of the atheistic stance as a negative position. The way he puts it makes it obvious it is the religionists who are the first ones to do the denying of the obvious positive presence of subjective earthly life. All thoughts to the contrary remain unprovable.

This study becomes really absorbing during the Enlightenment, especially in France at the end of the 18th Century, with a close description of the various schools of thought that sprang up before the French Revolution in the intellectual Paris salons of Baron d'Holbach, and the writings of the encyclopedist Denis Diderot. Many minor figures are identified in their various contributions and Stephens is always very careful to distinguish each thinker, making it clear if they are deist, agnostic, or atheist, thereby making us appreciate the fine points of those arguments. He also makes it clear that the mayhem of the French Revolution, though informed by atheistic attitudes, was not actually fuelled by atheism, but by complex historical forces beyond its purview. Atheism has often been burdened by linking it with the destructive side of revolutions, but he does not shy away from these political connections and deals extensively with the role of atheism in the development of revolutionary thought especially in the United States.

Stephens' history finally brings us to our own age, where he cites Dawkins et al for their important popular contributions to the topic. He considers the modern forms of secularism and defines a new form of soft secularism, where increasing numbers of people espouse vague, non-compelling spiritual concepts in the place of old-fashioned, firm, dogmatic beliefs. Beliefs that might as well not really be there beyond wanting to 'do good.'

Through all the vicissitudes of support recorded in various demographic surveys throughout the modern age, he is able to determine a gradual increase in people who try to do their thinking free from supernatural constraints. Any who agree may hope it is a growing trend.

Michael Doleschell keeps mostly to non-fiction, and is deeply devoted to music and culture and never tires of history, and is fascinated by science and the scientific method [as long as they are well explained]. He broadcasts a program of Classical Music for 3 hours every Saturday afternoon from noon till 3 on the U of G's Radio Station: CFRU.
Posted by Bookshelf Blogs at 4:26 PM