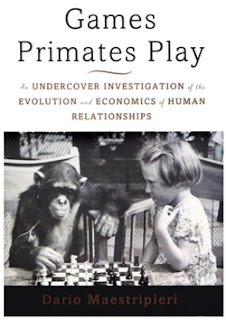 Games Primates Play: An Undercover Investigation of the Evolution and Economics of Human Relationships
Dario Maestripieri

Each chapter in Games Primates Play focuses on a specific aspect of human behaviour (i.e., competition, favoritism, dominance and so forth). Although the chapters contain some scientific information about their respective behaviours, the meat of the chapters consists of vivid examples of the ways that non-human primate behaviour is reflected in modern human behaviour. By using specific examples, Maestripieri is able to illustrate the exceptional complexity of many primate societies. The connections he draws between humans and the “games primates play” are not far-fetched; rather, they are informative, unexpected, and surprisingly hilarious. I particularly liked the section “We are all Mafiosi” in chapter three, where Maestripieri draws on his experience with the nefarious Italian academic community to speak about favouritism, nepotism, and mob culture in human and primate societies.

What I especially liked about Games Primates Play was that each chapter could easily stand alone.  Each was an interesting snapshot of human nature, much easier to digest than a continuous scientific narrative.. This meant that I could put down the book after a chapter and return to it without missing or forgetting details.


Ironically, my favourite part of this book was the epilogue. By concluding the book with an incredibly poignant and relevant story, the epilogue concisely and eloquently situates the book within its proper context. This book is not meant to reveal the meaning of life, nor does it make any value judgments about the goodness or badness of the primate or human relationships described throughout. The real purpose of this book, and where I think it ultimately succeeds, is to simply illustrate our relationship with primates and to show, for better or for worse, what human nature really is.

See Maestripieri's RSA talk on some of the ideas in his book:


Bookshelf Home
Bookshelf Reviews
Posted by Bookshelf Blogs at 6:37 AM