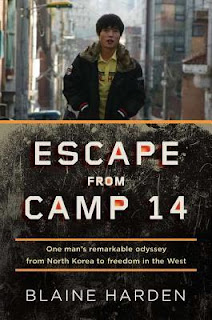 Escape from Camp 14 is a raw, remarkable, eye-opening biography about one boy’s escape from a secret North Korean prison camp.

Biographer Blaine Harden spent many years having to pry Shin Dong-hyuk’s story from him because of Shin’s lack of trust. However, the final story is a masterpiece. Shin was born and lived in a prison camp in North Korea until his early twenties, when he finally escaped by sheer luck. Shin was told he was to remain in prison throughout his life to pay for the sins of his uncles, and Shin believed his guards. Shin never once questioned why he was in the camps until certain events and individuals caused him to plan his escape. He was taught to steal, lie, hit, and hurt anyone for self-preservation. He did not understand love, forgiveness, or trust. Shin is the only person to be born in a North Korean prison camp and to then escape. His story is a courageous tale that helps us to understand the inequality and hatred that still exist in the twenty-first century.

Shin’s story of imprisonment is one many thousands of people share. Escape from Camp 14 is an educational, enticing book.

Bookshelf Reviews
Posted by Bookshelf Blogs at 5:38 AM