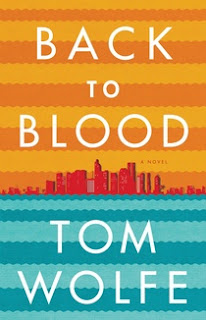 Back to Blood
Tom Wolfe

Be careful what you wish for, they say. In many ways, Back to Blood is about the unintended consequences of getting what you want. Wolfe throws together a Cuban cop who yo-yos between hero and pariah, his on again/off again girlfriend, a sex therapist, the staff of a major newspaper, a Russian painter fond of drink, and his patron—a Russian oligarch with aspirations. It’s the story of how one cop deals with the repercussions of his heroics on himself and the people around him. His story is set against the larger mystery of an expensive and suspicious gift to a local art museum by a wealthy Russian.

Wolfe’s cast are nothing alike, save one thing: they’re all trying to escape from their muddy past to their bright, shining future. The problem each of them faces is the present. They’re all locked in a work in progress under the blistering Miami sun. That makes them all infuriating and yet intriguing. It’s also what makes Back to Blood worth reading. In some sense, we’re all a work in progress.

Can I recommend Back to Blood? I found the first chunk of the book quite frustrating, but as Wolfe drew the threads of the story together, I found the end ultimately satisfying. I think you might enjoy it too, if you’re prepared to stick it out. I think you’ll want to.

Bookshelf Home
Bookshelf Reviews
Posted by Bookshelf Blogs at 5:41 AM