The Sixth Extinction: An Unnatural History 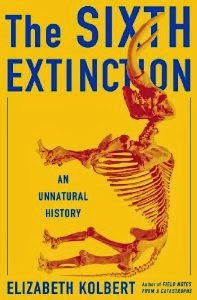 Elizabeth Kolbert is a meticulous researcher and a bold writer. However, I doubted that there had been five extinctions here on earth until I read The Sixth Extinction.  After gathering information from a wide range of scholars and experts, she summarizes these five previous extinctions, then moves forward to her proofs that we are both living through, and causing, the sixth extinction. The geological time of the five extinctions, and the number of living families extinguished each time, appear on a chart on page 16 of The Sixth Extinction. The fifth extinction, and most massive to date, was caused by the largest asteroid ever to strike the earth. That impact caused widespread devastation and extinguished much life here, including all dinosaur life. The New York Times published a world map of asteroid impact signatures in 2006. A circular graphic representation of the fifth extinction’s asteroid strike signature is clearly visible in the Yucatan peninsula area HERE.


In her New Yorker articles, New Yorker blog posts, and in her previous book, Field Notes From a Catastrophe (2006), Kolbert has reported on the worldwide effects of climate change. While writing the earlier book, she visited some of the areas on earth most heavily affected by climate change, and talked to scientists who were tracking previously unprecedented changes to various world environments. The reports in that book were all the more alarming because her descriptions were so clear and accurate. Kolbert also blogs regularly at the New Yorker. That magazine has a high pay wall, but her blog posts are not behind that wall—they’re always worth reading. Her last post? “Is it Too Late to Prepare for Climate Change?” 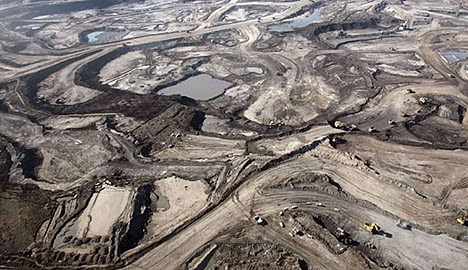 The aerial photograph of Fort McMurray tar sands that accompanied one of her New Yorker articles presents hell on earth, in Alberta. One of the world’s leading climate change scientists, NASA’s James Hansen, said that if oil production at Fort McMurray, came online, “Then the climate problem becomes unsolvable”. In other words, no amount of climate change mitigation will be able to counterbalance the massive global warming impacts from the development of those tar pits. Field Notes also provided a chronology of the increase in atmospheric carbon dioxide levels. The continuing increase in these harmful levels eventually led to the Kyoto Protocol in 2005, an attempt to work toward the reduction in the rate of increase in dangerous greenhouse gases. Stephen Harper dismissed the Kyoto Protocol as “a socialist scheme.” Following his dismissal of Kyoto, he fired a Canadian federal government scientist, one of the world’s leading climate change scientists, after this scientist scheduled vacation time in order to attend a global conference on climate change mitigation. Previously, Harper had ordered him not to attend the conference as part of his formerly usual and continuing responsibilities. 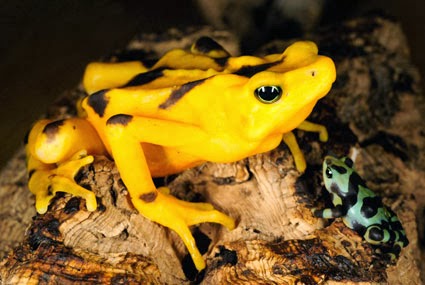 The subject of Elizabeth Kolbert’s current book is the sixth extinction, which is unfolding around the world, which we are in the process of generating and fumbling through now, often obliviously. The book opens with a chapter on the once prolific golden frogs of Panama. I recall news stories about frog migrations across roads, and until now, assumed that frogs were still plentiful. But things have changed. Kolbert introduces the reader to the golden frogs near the village of El Valle in Panama. They were once so numerous that a small nearby creek was called Thousand Frog Stream. A few years after her first visit to El Valle, she returns to discover that the golden frogs are on the verge of extinction. Other amphibians have disappeared as well. An amphibian researcher who is completing her doctorate, returned to Panama to discover that “she couldn’t find any frogs, or for that matter, amphibians of any kind.” Due to their sensitivity to changes in their environments, amphibians are one of the antennae of the future of life on earth.

The next two chapters, “The Mastodon’s Molars” and “The Original Penguin,” provide a layman’s guide to changes in the scientific understanding of natural selection, evolution, extinction, and paleontology. While considering the extinction of the great auk, Kolbert visits a museum in Reykjavik, where she watches a video that follows the process that led to the disappearance of this great bird. The video presents a continuous loop of a shadowy figure creeping along a rocky shore, until he is close enough to the auk, at which point he pulls out a club and beats it to death. Her response? “I found the video grimly fascinating and watched it play through a half a dozen times. Creep, clobber, squawk. Repeat.” Those four words are a blunt summary of far too many human-induced extinctions.

Chapter 5, “The Luck of the Ammonites,” does not describe how the Ammonites escaped from captivity under the Egyptian Pharaoh. Rather, it looks at the worldwide brouhaha when the Alvarez scholars presented their case that the fifth extinction was caused by an asteroid that hit the Yucatan peninsula. Up until then, many researchers were burrowing away in numerous specialized scholarly fields, and building rock solid careers by footnoting each others’ footnotes in disciplines such as paleontology, herpetology, and astrophysics. 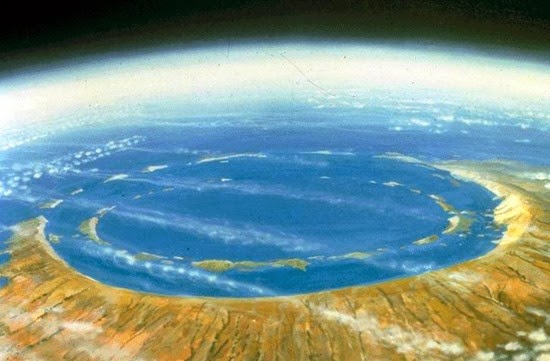 The asteroid was six miles wide, and created the Chicxulub Crater, now buried under half a mile of sediment. In 1980 the Alvarezes’ scholarly asteroid hit worldwide, in a paper titled “Extraterrestrial Cause for the Cretaceous-Tertiary Extinction.” Researchers in the above-mentioned disciplines, and a journal of clinical psychology, as well as The New York Times, all attacked the Alvarezes for their bad science. Fortunately, good science eventually drives out bad science, and the tide turned slowly, until the Alvarez theory triumphed. Given the adaptability of science, hopefully most of the scholars who attacked the Alvarezes have managed to dig themselves out from under their dusty layers of sedimentary research. When the asteroid extinction dust settles, more scientists will accept the message in the continuing work of Walter Alvarez, who recently said: “We’re seeing right now that a mass extinction can be caused by human beings. So it’s clear that we do not have a general theory of mass extinction.”

As for the ammonites, evidence in the shells of these endemic sea creatures provided one of the proofs in the science changing paper by the Alvarezes. This key chapter in The Sixth Extinction was fascinating, clear, and punctuated by occasional Kolbert humour:

One theory of the ammonites’ demise, popular in the early part of the twentieth century, was that the uncoiled shells of species like Eubaculites carinatus indicated that the group had exhausted its practical possibilities and entered some sort of decadent, Lady Gaga-ish phase.

Of course, the widespread acceptance of the Alvarez fifth extinction theory necessitated new vocabulary to describe its consequences. After the asteroid’s heat pulse, the world experienced a deadly “impact winter” that wiped out numerous species and lasted for many consecutive seasons. Complex worldwide ocean ecosystems collapsed completely into the newly formed “Strangelove Ocean.” The thorough destruction of great forests and other plant communities were replaced by the wide ranging spread of ferns in a “fern spike.” That spike established conditions that allowed plant life to re-establish itself worldwide. After reading that, I went out and watered the big fern in my kitchen, with a few “thank yous.”

In the chapters that follow, Kolbert crosses the world in order to present the details of extinctions that are either in the offing or now underway. “Welcome to the Anthropocene” examines the controversy surrounding arguments about whether to agree that the Holocene era has been superseded by a catastrophic era, known as the Anthropocene. There are a number of arguments in favour of this change. One of the Nobelists quoted in this book came home and told his wife, “The work is going well, but it looks like it might be the end of the world.”

“The Sea Around Us” and “Dropping Acid” are too lengthy to summarize here, other than to quote scientists who have been observing dramatic changes in seawater acidity or pH: “This led the group to conclude that were such a pH decline to occur globally, the results would be ‘catastrophic’.”

“The Forest and the Trees” provides the good news that some tree species affected by increasing temperatures are seeding higher and cooler mountain slopes in order to escape increasing the higher temperatures now found in lower areas. The bad news is that there’s a “high likelihood that climate change on its own could generate a level of extinction on a par with, or exceeding, the slightly ‘lesser’ extinction events” of the past.

“Islands on Dry Land” examines decline in “the dispersal of biodiversity, the result of which could be “one of the greatest biotic crises of all time. ”The New Pangaea” leads us on a census expedition into one of the large bat caves in New York State. One of the census biologists says in a phone call back to a colleague, “Holy shit, there’s dead bats everywhere.” And they were dead, everywhere in the cave. There had been a massive die off since the last census. A die-off that continues elsewhere.

"The Madness Gene" is not about the failed attempt of the Tea Party to take over the Republican Party, but about something far worse. It examines how we have wiped out our evolutionary cousins over the centuries: Having cut down our sister species—the Neanderthals and the Denisovians—many generations ago, we’re now working on our first and second cousins. By the time we’re done, it’s likely that there will be among the great apes not a single representative left--except, that is, for us.

Elizabeth Kolbert cares deeply about the fate of life and human life on earth. So deeply, that in order to bring the extinction news back to us, she has repeatedly put herself in danger to write this book. Swimming with sharks at the Great Barrier Reef off the coast of Australia. Awakened in the night by potentially violent cocaleros transporting cocaine at night through the forests of Peru where she was sleeping.

Although they share similar concerns, The Sixth Extinction and Field Notes from a Catastrophe are very different works. High and low humour punctuate Sixth Extinction, whereas little humour appears in Field Notes, even though the global situation is much worse eight years later. Maybe Kolbert has lightened up, or maybe the marketing department thought more people would buy a necessary book with an occasionally lighter tone. Is there hope now, or is Kolbert now whistling past the global graveyard we are so intent on digging ourselves into? Here’s the concluding sentence of Field Notes (2006): “It may seem impossible to imagine that a technologically advanced society could choose, in essence, to destroy itself, but that it what we are now in the process of doing.” And here’s the penultimate sentence of Sixth Extinction (2014): “Right now, in the amazing moment that to us counts as the present, we are deciding, without quite meaning to, which evolutionary pathways will remain open and which will forever be closed.”

There is much more in The Sixth Extinction than I was able to cover here. When I finished this book, I asked myself what I have been doing to reduce climate change. And what more I can do? What am I doing now to reduce my impact on global warming? Reading it is not like being condemned to watch Cormac McCarthy’s The Road in an endless loop. At its best, an accurate picture of a dire situation often generates hope and reasonable action.

Read more from James Reid at www.jamesedwardreid.ca
Posted by Bookshelf Blogs at 3:23 PM