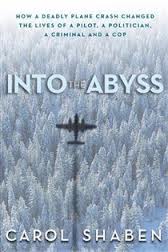 Into the Abyss
Carol Shaben

We've received two takes on this extraordinary tale of tragedy and survival.

An Intertwining of Lives

Frequent fliers may experience apprehension when reading this story. While this tale is indeed founded on a tragic event in 1984, its subject matter extends well beyond the realm of a terrible plane crash. Of course, any such experience would be life-changing for anyone involved; however, for the four survivors of this particular accident, their lives became intertwined. How this occurred is both thought-provoking and, ironically, inspiring.

Carol Shaben’s writing draws connections that accentuate the special relationship between these four men.  The crash was a defining moment for all four, but in drastically different ways. Each individual’s experience was profoundly moving and unexpected. Two of the survivors experienced moments of brilliance after the crash, to later find themselves trapped in a rut of unfortunate events. The third survivor found new meaning in his life through his “near death” experience. He re-assessed his livelihood and created the ultimate bucket list for himself. The final survivor rediscovered the importance of family and friends, which served as a great motivator in his life, which was lived in the public eye.

Overall, Into the Abyss demonstrates the challenges faced by normal people every day. The stories can help anyone who is feeling overwhelmed with his or her own life. The lives of these four previously unrelated people are vastly different, yet they are all bound together by one crash. Despite all obstacles, these four men pressed onward with their lives, unknowingly building a great legacy.

When VP Publisher Anne Collins read Carol Shaben’s proposal for Into the Abyss, she could feel every single hair on her arms rising. This riveting account of the deadly 1984 plane crash in the Canadian wilderness reads like an action thriller.

On a stormy night in northern Alberta, a young rookie pilot ignored his better judgment and flew an unsafe Piper Navajo commuter plane into the skies. Six of the nine passengers died, leaving behind the pilot and three other survivors, among them a politician, an RCMP officer, and a criminal.

After surviving a night of sub-zero temperatures and injuries, the men embarked on their own versions of the hero’s journey. The pilot took responsibility for his role in the crash and went on to become a safety compulsive. The RCMP officer continued to work with the criminal justice department, but is no longer “the black-and-white, rigid, career-driven, typical kick-down-the-door cop.” After leaving the Alberta legislature, the politician dedicated himself to philanthropic and volunteer work. The criminal was not really a bad guy, just a hard-luck guy who struggled with the hero label that followed him after the crash.

Author Carol Shaben, the politician’s daughter, devoted most of her adult life to the research and development of this book. She also wrote award-winning articles exposing the need for improved government regulations in Canada’s commuter airline industry.

Bookshelf Home
Bookshelf Reviews
Posted by Bookshelf Blogs at 10:13 AM