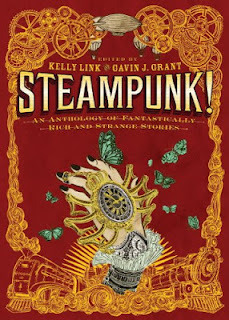 Steampunk! A relatively recent science fiction genre that, paradoxically, reaches back further than any other. Steampunk is for the person who prefers steam to electricity, clockwork to batteries, and antiquity to technology. Steampunk has become quite popular over the last few decades. It’s not only found in books, but in movies (Steamboy, Wild Wild West), music (Abney Park and The Cog Is Dead) and is even celebrated annually in several festivals in New Jersey, Vancouver, and Toronto.


Now steampunk fans can add a treasure trove of steam-powered stories to their shelves. Steampunk! contains fourteen stories written by some of today’s best new authors. The beautiful thing is, no two stories are alike. Each one is told in its own unique, creative way. Some aren’t even written at all, but drawn, the atmosphere and backgrounds carefully crafted to bring the story to life.

All may share the basic elements of steampunk—brass, gears, and goggles—but they go so far beyond as to create an entirely new spectrum out of the genre, a veritable menagerie of the odd and the wonderful. Holly Black writes of a clockwork house that gains semi-sentience and begins to question the orders of its owners. Cory Doctorow weaves a Dickensian tale of orphaned cripples replacing their governor with a brass automaton. Kelly Link inserts a bit of fantasy into her writing, tinkering faeries whose tiny, incredible creations dazzle and enchant. And that’s only three!

Not restricted to Victorian England, these stories go to other planets, other universes, the wild west, the Roman empire, and even our own world. They contain gigantic factories, talking dolls, ghosts, faeries, demons, time travel, mystery, mechaniques, and the very first flight of an airplane. There are explosions, villainy, war, revenge, treasure and so much more to read and experience.

The problem with anthologies is that they so often contain stories that are quite good, but also ones that are quite boring. Not so with Steampunk! Each story is a journey to a new world, a re-evaluation of all that is possible and all that could have been. “Steampunk is the intersection of romance [adventure] and technology,” wrote steampunk artist Jake von Slatt, whose designs for a homemade Wimshurstmachine may be seen online. He couldn’t have been more right.

What are you waiting for, then? Strap on your goggles, fire up your The Cog Is Dead CD, and settle down for some of the most timeless stories ever written. Steampunk! is destined to become a classic, and a true representation of the steampunk genre.

Bookshelf Reviews
Posted by Bookshelf Blogs at 7:06 AM