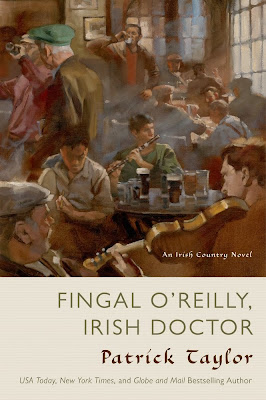 Fingal O’Reilly, Irish Doctor
By Patrick Taylor
The eighth installment to Patrick Taylor’s Irish Country series is what I would call, if I were one of his characters from Dublin, Jus what the Doctor feckin ordered. With perfect portrayal of the Irish country folk and the Ulcer and Dublin dialects, along with the purely fulfilled lives of Doctor O’Reilly and the characters adjoined to his journey, it is tough for yet another story from this series to not intrigue readers, raise laughter, and warm the heart.

Fingal O’Reilly, Irish Doctor follows Dr. O’Reilly in the newly remarried chapter of his life (to his long lost sweetheart, “Kitty” O’Reilly née O’Hallorhan in Ballybucklebo) while sharing stints from the Doctor’s earlier days testing the waters as a General Practitioner in the Liberties of Dublin. Throughout Taylor’s novel, we see how the experiences of his youth remain with Fingal, how they shape him as a person, prepare him for further practice as a GP, and teach him that “sometimes difficulties to which he could see no solution happily solved themselves.” Many of the favoured characters of the series like “Kinky” Kincaid, Dr. Barry Laverty, Dr. Jennifer Bradley, and Donald Donnelly, reappear along the way with new happenings in their lives which, of course have the good ol’ Doctor himself involved.

A story you will invest yourself in, a story to which you will share with your children and friends in hopes that, just as you had, they will learn and strive to be better people from the exemplary lives portrayed within the pages; Fingal O’Reilly, Irish Doctor is a classic.

A man of many interests, Joseph Cassidy is; A Star Wars fanatic; Maple Leafs fan to the core; musician; and a lover of literature, just to name a few. Brought up in the country side of Bruce County, Joseph has had the fortune of witnessing and existing in the humbly rich small town communities, the privacy of 100acres and the wonderful nature, landscape and wildlife that surround it. This in addition to his Irish ancestry, could perhaps explain his love and appreciation for Patrick Taylor's Irish Country book series.

Check out Joseph's review of An Irish Country Christmas:     http://bookshelfreaderreviews.blogspot.ca/2012/12/an-irish-country-christmas.html
Posted by Bookshelf Blogs at 5:40 PM