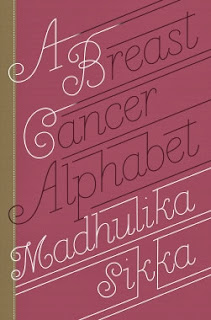 I approached the book with mixed feelings. Part of me wanted to put it back on the shelf and move on to the fiction section, but my well-honed left brain couldn’t resist passing by an Alphabet guide to any topic. In this case, I was very familiar with the topic and had actually lived through many of the experiences described in the twenty-six chapters.

Madhulika Sikka and I belong to the same club. We are breast cancer survivors.

As I approach the ten-year survivor mark, I struggle to recall the specifics of my journey and often wish I had kept a journal. Reading through A Breast Cancer Alphabet, I found myself nodding and smiling at Sikka’s lively and slightly outrageous commentary. I would love to have read this book while waiting for biopsy results, dealing with the side-effects of chemo and radiation, or simply resting at home. 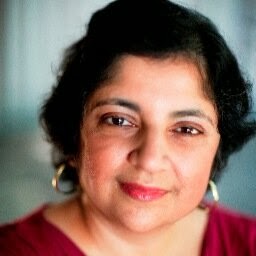 Like most women who have been diagnosed in the twenty-first century, I was inundated with literature about mastectomies, chemotherapy and radiation. At times, it was overwhelming and I could feel my eyes glazing while reading through the information. It would have been comforting to read short and breezy chapters with such tantalizing titles as E is for Epiphany, I is for Indignities, and P is for Pillows.

In A Breast Cancer Alphabet, Madhulika Sikka provides “a little pick-me-up...for anyone who has been diagnosed with breast cancer and needs a companion.”

After retiring from a 31-year teaching career, Joanne Guidoccio launched a second act as a writer. Her articles, book reviews and short stories have appeared in newspapers, magazines and online. Last month, Soul Mate Publishing released her debut novel, Between Land and Sea, as an ebook on Amazon. You can visit her website at www.joanneguidoccio.com
Posted by Bookshelf Blogs at 8:43 AM