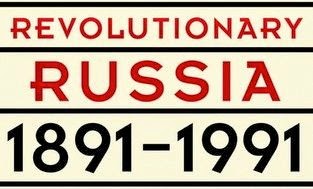 Orlando Figes is the award-winning author of numerous books and articles on Russian history. His most recent, Revolutionary Russia, is the most informative book I’ve read on Russia since working—and I mean ‘working’—my way through Solzhenitsyn’s groundbreaking, and permafrost breaking, Gulag Archipelago. Unlike Solzhenitsyn’s often overwhelmingly grim, yet necessary Gulag trilogy, Revolutionary Russia is hard to put down.

Figes’ approach here is to look both back and ahead at the significant revolutions and internecine conflicts that shook Russia over the course of one hundred years. This period ranges from the overthrow of the Tsarist autocracy to the collapse of the Soviet regime in 1991. He manages this long challenge with a deep knowledge of Russia, and occasional touches of welcome humour.

Early on, he reveals a censorship gaffe that changed the life of hundreds of millions of Russians. Tsarist book censors allowed Marx’s Capital to enter Russia uncensored. They assumed that “very few people in Russia” would read it, and “even fewer would understand it”. How many other books have had such a profound effect on so many nations? The Russian political economist Petr Struve took a different path to Marx. He said that the famine (one of many) “made much more of a Marxist out of me than the reading of Marx’s Capital.” Figes’ take on Marx and Lenin is, “It was not Marxism that made Lenin a revolutionary, but Lenin who made Marxism revolutionary.”

The arc of Russian history here is long. And it does not often bend toward justice, but toward repeated injustice, as Russian supported violence continues to unfold today in Ukraine. Figes’ history begins in the late 1800s. Russian rule of Poland under the Tsar leads to the brutal suppression of uprisings in Poland in 1830 and 1863. But Tsarist rule is approaching its end. Looking back at that time from 1917, a Polish farmer reveals, “I myself did not know that I was a Pole till I began to read books and papers.”

The arrival of Soviet socialism during the 1917 Revolution had other unexpected results. “Some soldiers refused to fight for more than eight hours a day, claiming the same rights as the workers.” The Russian revolution in 1917 sweeps away both the past, and Russia’s class society. In that year, Tsar Nicholas, Alexandria, and their five children are sent to the “provincial backwater” of Tobolsk. Then they are all transferred to Ekaterinburg, where they are executed at night at close range by a Bolshevik firing squad. At night, in secrecy? Or in shame? Trotsky put it bluntly, “the country had so radically vomited up the monarchy that it could not ever crawl down the people’s throat again.” He was only partially right—the current Russian oligarchy has crawled its way to great power and wealth.

The Tsarist secret service, OKRANA, is the first in a series of shapeshifting acronyms that became, sequentially, the CHEKA, OGPU, NKVD, NKGB, MGB, KGB, and to the FSB, the last acronym change of which was instituted by Vladimir Putin, the former head of the KGB. For over a century, regardless of who was in power, each of these secret service organizations has spied on and often destroyed the lives of millions of Russian citizens.

Figes covers this long arc of history through “the Revolution’s rise and fall in three generational phases”. First, “the lifetime of the Old Bolsheviks, mostly born in the 1870s or 1880s”. Second, “Stalin’s ‘revolution from above’”. And third, “Khruschev’s speech denouncing Stalin’s crimes marks the Revolution’s third and final phase’”. Khruschev’s astonishing speech changed Russia forever—it is available and worth spending some time with HERE.

Khruschev’s speech to the Twentieth Party Congress had astonishing effects. Some delegates were so shocked by Khruschev’s attack on the once all powerful Stalin that they were felled by heart attacks. One delegate committed suicide. Khruschev’s speech triggered massive changes in Russia, that many feel ultimately led to the collapse of Soviet hegemony in Europe. The Berlin Wall, and all those SSRs (Soviet Socialist Republics) that kept the Cold War hot have all disappeared.

Figes’ divisions into three historical periods are not rigid, as he repeatedly looks back and forward in time to link long historical trends during the one hundred year period under consideration. He also enjoys a good story, such as the one about the Czech army soldiers in Russia who intended to cross Russia, the United States and the Atlantic Ocean in order to reach Europe in order to fight the German army during the Second World War.

However, I have a concern about omissions in Revolutionary Russia 1891 - 1991. The title is engaging, but Figes does reference events as late as 2011. For instance, the bombings of the Moscow apartment towers in September 1999 were blamed on Chechen terrorists, just before the election that returned Putin to power, just after he blamed Chechen terrorists for the bombings. However, the ‘signature’ left by the explosives in the bombs indicated that the explosives used were only available to members of the Russian secret service, the FSB, formerly, and probably still directed by Vladimir Putin. See The New York Review of Books HERE.

Figes book was published halfway through 2014. So the book manuscript may have been in final draft and on its way to printing before the 2012 bombing article in the NYRBooks. However, there are other omissions. There is no mention of the professional execution of one of Putin’s fiercest critics, the journalist Anna Politskovkaiai in 2006. The security camera in her residence videotaped the murder, three bullets to the chest, and a final “control shot” to her head. She was murdered on Putin’s birthday. Her assassin got away with more than murder. There is also no mention of the violent government response under Putin that led to the Beslan School massacre (2004), including the deaths of 186 children. There is no reference to bloodshed in Grozny or Starye Atagi. However, there is significant and appropriate description of positive initiatives by Putin.

Will Figes treat these areas of deep concern about Putin in a future book? Or does Putin’s reach extend beyond the largest country in the world, the Russian Federation?

James Edward Reid’s Justice Denied: Janowiec et al versus Russia Before the European Court of Human Rights will be published in the January issue of The Sarmatian Review at Rice University in Houston. www.jamesedwardreid.ca
Posted by Bookshelf Blogs at 3:23 PM