REVIEW: THE BACK OF THE TURTLE 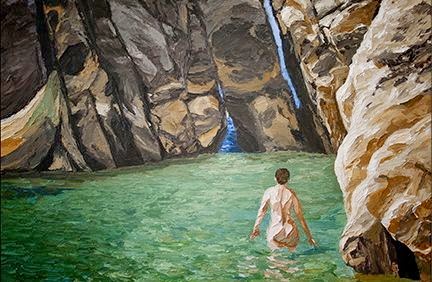 Artists, the American poet Ezra Pound wrote, are the antennae of the race. I had just finished a passage in Thomas King’s The Back of the Turtle that describes an environmental catastrophe when, turning on the radio to listen to the news, I was eerily surprised to hear the first breaking reports about the tailings-pond spill at the Mount Polley mine in central B.C. If King is going to show this degree of prescience, I thought, he needs to be very careful what he writes about.

The Back of the Turtle, King’s much-anticipated new literary novel, echoes some of the themes King explored in his 2003 Massey Lecture series, The Truth About Stories. You may recall that King began each of his lectures with a story about the earth floating on the back of a turtle. Asked what the turtle stands on, the answer is that the turtle stands on the back of another turtle. Asked what the second turtle stands on, the eventual reply is that “it’s turtles all the way down.” That seems a whimsical way of describing the world’s foundation, but these are, after all, not physical turtles, but story turtles, and King’s ultimate point in his lectures is that “The truth about stories is that that’s all we are.” (Mind you, in the era of virtual reality, credit default swaps, and Bitcoin, “turtles all the way down” can seem as much warning as whimsy.)

What would happen if all those turtles disappeared? That’s the question King explores in The Back of the Turtle, and the question cuts a number of ways. Environmentally, as negligence leads to an ecological disaster that wipes out all the turtles and most other life near the west coast community of Samaritan Bay, including the residents of the now-abandoned Smoke River reserve. Economically, as King shifts his setting to corporate Toronto to explore how skewed conceptions of what the bottom line really is lead to tragic consequences. Ethically, as Gabriel Quinn, a research scientist gone AWOL, returns to the town he helped to destroy for the purpose of destroying himself.

And, finally, spiritually. One of the recurring pleasures of King’s works is his gift for interweaving oral tradition and modern narrative, and a motif woven throughout his novel is the creation story of the woman who fell from the sky. After accidentally digging  a hole in the sky, the woman tumbles through space until she falls onto a watery earth, landing on the back of a turtle. There she, the animals she encounters, and her twin sons work together to create the world. Historian of religion Mircea Eliade wrote that creation stories are not accounts of how the world was once created but are in fact descriptions of how it is re-created every moment. But the avaricious contemporary world of King’s novel has emptied itself of both turtles and stories. Lacking those foundations, it’s no surprise that creation begins to unravel.

As in his other work, King here handles things with a characteristically deft touch, a wry sensibility that unfolds these issues through characters that intrigue and affect us: Nicholas Crisp, a salty, Pan-like resident of Samaritan Bay who speaks in an archaic dialect and can’t resist a nautical turn of phrase; Mara, an artist determined to face old ghosts and re-establish her life on the reserve; and Sonny, a reclusive boy whose attention is divided between obsessive hammering, combing the beach for salvage, and building a beacon to call life back to Samaritan Bay (and whose Daddy issues definitely take a capital D).

Even Dorian Asher, the CEO of Domidion, a biotechnology and resource extraction company responsible for multiple environmental crises, is on the one hand a repellant personification of corporate malfeasance and on the other, with his worries about his marriage, his obsession with style and fashion, and his pathetic inability to choose between two thousand-dollar watches, a complex, perhaps even bizarrely amiable embodiment of Hannah Arendt’s banality of evil. But unlike Eichmann, who was embedded in the Nazi system, Dorian is embedded in western consumerism. Like Arendt, King is suggesting that the roots of evil are complex and that evil-doers are perhaps not so different from us as we would wish. The implication is that, faced with environmental catastrophe, what is needed is not merely an easy demonization of someone else but a broad survey of the shared landscape and a penetrating, if discomfiting, look in the mirror.

The Back of the Turtle explores questions of recovery, both environmental and personal, and shows the two to be intrinsically linked to each other and to story-telling. Gabriel and Mara struggle to weave their broken histories into coherent stories they can tell themselves and others, and then to relate their stories to larger narratives that will provide a foundation for rebuilding the world. Like most oral tales, King’s is, to quote Native American scholar and writer Louis Owens, both the telling of a story and the story of a telling.

In The Back of the Turtle an abandoned, rusty barge freighted with deadly cargo drifts randomly through the oceans and the story. Like an ecological Flying Dutchman, it eludes capture and is a constant, foreboding presence. Science fiction writer Philip K. Dick once defined reality as “that which, when you stop believing in it, doesn’t go away.” Fatigued or overwhelmed, we may shut our eyes to the future environmental consequences of our actions, but still they drift out there in the fog, ready to grind up inescapably on the shoals when we least expect it. And when we try to dodge awareness of our actions’ consequences, we also lose the past in which we acted, finding ourselves stranded in an ungrounded present. In Thomas King’s novel, only those characters who stare the past full in the face and bravely tell or sing their stories can hope to re-create the world, for stories, though they are made of air, are the turtles on which the world stands.

Bruce Dadey is a devotee of all things literary, including poetry, essays, fiction, and graphic novels. He teaches in the English Department at the University of Waterloo.
Posted by Bookshelf Blogs at 5:19 PM