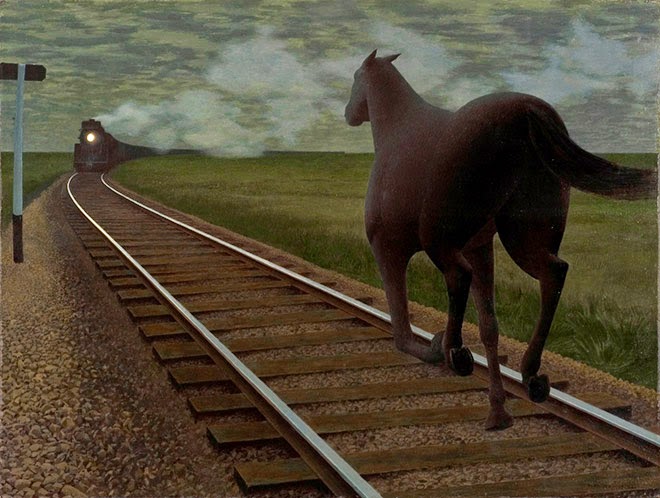 During my first year of art college, I moved into a plushy apartment coloured in pastels. The one piece of décor that seemed out of place was a framed print of Alex Colville’s Horse and Train hanging in the living room. To say that it was juxtaposed to its surroundings would be an understatement. Then immersed in superhero comic books, I never considered that the image, or the Colville's body of work, would go on to affect me the way it has.

Completed in 1954, Colville has described Horse and Train as “the skeleton key to all my paintings." It was inspired by lines of prose by South African poet Roy Campbell (1901-1957): “Against a regiment, I oppose a brain / And a dark horse against an iron train”. The horse is turned away from the viewer, inviting the audience to project themselves and their empathy onto it. It becomes an Everyman: a student in Tiananmen Square, a force of Nature opposing an industrial revolution, a general symbol of subversity and struggle. Not only is the image easy to identify with, it is perhaps impossible not to. 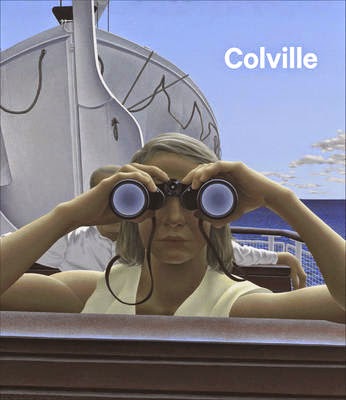 A new book has come out on Colville, little more than a year after his death and serving as accompaniment to an exhibit at the AGO. Both book and exhibit are ambitious in that they strive to nail down exactly what gives the artwork such wide appeal. Comparisons are made, correctly, to the writing of Alice Munro. Both creators are essentially telling short stories of small town living, yet speaking with a more worldly perspective. There are parallels made with film as well, with examples that suggest filmmakers lift from Colville, like Wes Anderson in Moonrise Kingdom, or simply share a similar visual palette, such as the Cohen brothers. (Curiously omitted is Michael Mann’s Heat, in which there is an unmistakable tip of the hat to Colville’s Pacific in a scene with Robert De Niro.) And while works of two of Colville’s former students, Mary Pratt and Christopher Pratt, are on display alongside their late teacher at the AGO, little mention is made of the giant sphere of influence he has had on countless painters. I, myself, am one of those countless; I have found it impossible to create my own work without leaning on his influence, sometimes to a fault.

Doubtless, one could publish a book solely on all the artistic works which bear the Colville stamp, and, thankfully, this isn’t it. This most recent publication is, quite simply, beautiful to look at. The text is concise and one could make a strong argument that the images themselves were made to be read. For all of the accuracy and geometry behind them, the qualities that captivate us most are those of context, narrative, and the “intrinsic symbolism” that Colville was concerned with. The reproductions of the work are as perfect as one could hope for, with colours and crispness being surpassed only by the originals. Roughly half of Colville’s entire body of work was selected for this book. Beautiful photographs of his centennial coins grace the inside covers. We are also treated to intimate glimpses into the life he shared with his late wife, Rhoda, who served as model and muse for so many of his paintings.

Author-curator Andrew Hunter has implied that he wanted to ensure the lasting relevance of Colville’s images. It is doubtful that the Canadian public needed to be convinced of this at all. It is, however, highly probable that the same public will be grateful for the effort.