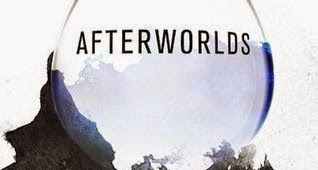 I have been a fan of Scott Westerfeld ever since I picked up the immensely entertaining Leviathan trilogy. When I heard that he was coming out with something new, I got excited. And I wasn't disappointed. Afterworlds is a fun little novel – or rather, two fun little novel. It's a peculiar book that is split into two halves. One is a story about a girl named Lizzie who gains the ability to travel between the worlds of the living and the dead. The other half is about a girl in our world, Darcy who wrote the novel about Lizzie. In essence, it reads almost like two distinct books, so I shall discuss it as such.


The first half, the 'real-world' aspect, is a lot of fun. Nothing really big-scope happens; there's no world to save, no villain to defeat, no crisis to avert. It is just Darcy going through the process of getting her novel published. As someone who hopes to get their own novel published sometime within the next couple of years, I found it interesting and refreshing. There are moments of humour, moments of stress, moments of indecision -- everything a budding author goes through. There are clever touches in it discussing the Lizzie half of Afterworlds; what the character should do next, where she should go. Some of these do find their way into the Lizzie half; Darcy will decide she likes the sound of a particular word, for example, and in the next chapter Lizzie will find herself using it. It's a very good way of connecting the two halves and one I enjoyed.

The Lizzie half of the book is less good. It is ostensibly a novel written by an eighteen-year-old, and I do give credit to Westerfeld for making it seem as though it actually was. Though this lends credence to the Darcy half, it does detract from Westerfeld's normally fun writing. There are several weak cliches present in the Lizzie half, in particular the character of Yamaraj, a three-thousand-year-old boy whom Lizzie falls in love with. Sadly, since the Lizzie half of the book is told in first person, we scarcely get to know Yamaraj for more than his good looks and rippling muscles, and reading constant repetitions of them gets tiring fast, since his personality isn't very developed to compensate. It does follow the familiar pattern of a YA novel -- identifiable heroine, basic good versus evil climax, and rushed romance -- but o me it just feels like an essay that was written the night before it was due.

I would recommend Afterworlds solely on the basis of the Darcy half of the book. It is constructed so that it can very nearly stand alone from the Lizzie half. And it does have fun moments and interesting thoughts on the publishing process, which is useful to know for those planning on publishing. All in all, not Westerfeld's best work, but one that can be enjoyed as a quick read nonetheless.

Robert Green is a confirmed bibliophile and aspiring writer whose love of sci-fi has caused him to own many more books than he has physical room for. He is also the owner and creator of the up-and-coming company Verity Books, which can be seen at various cons throughout the year. Any questions or comments can be sent to veritybooksanddvds@gmail.com or facebook.com/veritybooksanddvds.

Posted by Bookshelf Blogs at 6:53 AM