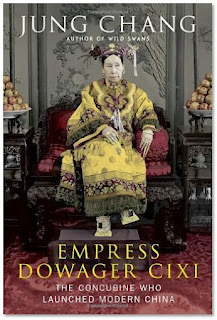 
Had a man accomplished just a few of Empress Dowager Cixi’s many farsighted achievements for her immense country, he would have been held up as a hero. Even if he had made more mistakes—Empress Dowager Cixi was inevitably, occasionally mistaken—they would still be passed over silently in the face of the progress, especially in the modernization, and internal reform that she eventually brought about. Jung Chang’s Empress Dowager Cixi is a stunningly good, highly needed revisionist piece of history and historical biography of a figure whose accomplishments in China have been obscured and maligned for over a century, largely because she was simply a woman.

At the root of the adversity Cixi faced was the pivotal fact that she was female. The medieval attitude toward the subjugation of Chinese women rendered them permanently dependent and immobile. There are few societies that had subjected its entire female population to such literally crippling traditions to restrict them to a passive servitude. Just to have lifted the ancient edict in China to bind from birth and thus cripple and permanently atrophy what was left of all women's feet, would have seemed impossible and would not even have occurred to a man had he been in power. But Cixi, after her several returns to power on, or behind, the Imperial Throne, simply outlawed it. As a Manchu amongst the Chinese--the ruling Dynasty was Manchu--she did not have bound feet, but her Buddhist compassion and common sense allowed her to realize the enormous pain it caused. She also removed torture in capital punishment, would that she had been able to end capital punishment altogether, but in China such a thing seems to be truly unthinkable—so far.

Cixi’s story has many villains, most of whom she had the insight and compassion to try to win over with kindness. She seems to have succeeded; some of them became trusted allies. The only antagonist Cixi was never able to get a hold of, who had tried several times to assassinate her, or have her assassinated, she would surely have had executed. Chang amusingly, almost as in a fable, always calls this villain Mad Fox Chang. It is unclear if this is her own invented sobriquet or whether he had already been labelled this way in the histories. He escaped Cixi's clutches, and  joined her worst enemies, the Japanese, with whom he continued to invent calumnies about her that were taken up into the historical account, which this book is trying to correct. The European diplomats heard Mad Fox's lies and reported them back in the courts of Europe where they distorted attitudes there toward the Chinese.

Prior studies of Cixi, like Marina Warner's The Dragon Empress, although sympathetic, were only able to repeat the frequent slanders against her in the accumulated past histories. But, being Chinese, Jung Chan has been able to do her own research and better verify her own sources. It seemed as if we would never get close enough to the facts to understand many puzzling things ascribed to Cixi, but this new account gives a satisfyingly clear picture of its subject and provides enough information to give a convincing idea of what really happened, and the decisions—or worse—the indecisions she faced.

As a very successful author in English, Chang wrote The Wild Swans, which also gives a view of history, in that case of a family negotiating three generations of life in China. She wields a very unique stylish English that bears clear traces of the Chinese mentality informing it and sometimes renders things in a brief bluntness of expression, like playful remnants of pidgin English that seem sometimes to get attitudes across more succinctly, almost pungently, than a more genteel rendering. This applied coarseness is sometimes gently amusing.

It has always been hardest to picture exactly how Cixi, as a woman, was able to bring off her several coups into and back into power, but here we can clearly understand the environment and institutions in place that allowed them. There is wonderful exposé here of the Chinese Imperial system in action, how power was conferred and how it was wielded by the Emperor, all without footnotes or didactic exposition. Chang lets us  understand everything by simply watching it function. There was still a medievally direct, almost fabulous simplicity to the Emperor's authority; Cixi simply acceded to it because there was no one else in that level of the Dynasty who could wield it. Both young 'Emperors' of whom she made herself the proxy were clearly inept, and were in danger of harming the country had they continued in power. This already supposes a very high level of civilized restraint and sophistication amongst the Chinese Court which must have been well aware of the perils and responsibilities of being on the throne, which demanded a life of unstinting service to the demands of the office. Cixi seems to have been the only one there with a true taste for it. She comes now to represent one of the most enlightened despots of history, and her mistakes now only serve to render her more human.

Michael Doleschell keeps mostly to non-fiction, and is deeply devoted to music and culture and never tires of history, and is fascinated by science and the scientific method [as long as they are well explained]. He broadcasts a program of Classical Music for 3 hours every Saturday afternoon from noon till 3 on the U of G's Radio Station: CFRU.

Posted by Bookshelf Blogs at 5:24 PM