REVIEW: THE CONFABULIST by STEPHEN GALLOWAY 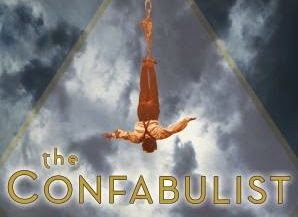 Few people would associate magician Harry Houdini with the work of Scotland Yard leading up to WWI or the assassination of the Romanov family in 1918.  Even fewer would be able to make a connection between Arthur Conan Doyle and the illusionist, though the two men had regular contact that was marred by tensions between Doyle’s unrelenting belief in the supernatural and Houdini’s ability to ground all supposed magic in the real world. Galloway exposes these and other aspects of the magician’s life that have been dismissed into the past in a semi-biographical text on Houdini and his killer, Martin Strauss.

The story opens with Martin’s visit to a doctor, who tells him that he will eventually lose his mind due to a cognitive dysfunction in Martin’s brain. The character’s need to tell the story of Houdini, and how he killed him twice, is driven by his fear of forgetting crucial events in his life that involved the magician and Martin’s own family.  The narrative then shifts to Houdini’s side of the story and explores his rise to fame with the help of Scotland Yard, for whom Houdini agrees to provide information on people of significance to the organization, like the Romanovs. As the magician becomes increasingly entangled with behind-the-scenes political crimes and scandals, he fights against the hold that the organization has on him and his career. At several points during his shows, his life is put at risk by mysterious and unidentifiable forces, which influences Houdini to disappear from the public eye.

This is where Martin enters the story. While attending one of Houdini’s shows, Martin sees Houdini and without any explanation, punches him in the stomach, causing Houdini’s appendix to burst, leading to his death. By revisiting his memories, Martin attempts to make sense of his actions, including the events that lead to the loss of his love interest. With a highly unreliable character experiencing mental confusion and memory loss narrates the story, the reader has to decide what’s real and what only exists in the imagination, much like the audience members at Houdini’s shows. The result is a disconcerting narrative that questions the reliability of the mind to understand what it sees.

The Confabulist immediately entrances as the reader is pulled into a world of secret plots, illusions, and the politics that defined America and Europe at the turn of the century. The deceptions that are both purposefully and unintentionally created by the characters heighten the intrigue around Houdini’s life, which elevates Galloway’s book from a mere biography to a complex fictional work. By giving voices to real-life individuals, like Margery Crandon, who was an acclaimed medium during the time period, or Sergei Vasilyevich Zubatov, a dangerous Russian police administrator that operated in Moscow, they emerge from their two-dimensional historical identities and populate Houdini’s world, which adds to the incorporation of the real with the fabricated that occurs throughout the book.

While some parts of The Confabulist might appear to border on the absurd and force the reader to check the historical accuracy of events, the author succeeds in produced an absorbing story that at the very least satisfies the reader’s desire to learn about the reality behind magic tricks.


Alicja Grzadkowska is finishing up her final semester at the University of Guelph before moving on to study Journalism at Ryerson in the fall. Her bookshelf is stacked with yet-to-read fiction titles, which hasn't stopped her from regularly adding to her collection. Traveling to big cities across North America is another one of her obsessions, and one which she hopes to indulge in again this summer.
Posted by Bookshelf Blogs at 1:39 PM