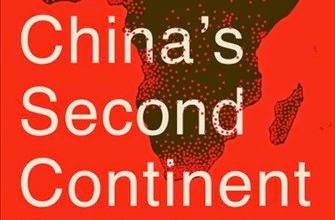 In 2004, the New York Review of Books lauded French’s previous book, A Continent for the Taking: The Tragedy and Hope of Africa. The NYRB described it as “Exhilarating for its frankness . . . A Triumph of passionate reporting.” In that book, French denounced wrongheaded American foreign policy in the Congo, Nigeria, and especially in Rwanda, where 800,000 mostly Tutsi people were massacred, while the world stood by and watched.

French worked for many years in Africa as a reporter for the New York Times. Fortunately, both of his books are free of the Times' insistence on coverage that is, at best, sober-sided, and, at worst, middle of the road. China’s Second Continent provides detailed on-the-ground descriptions of the impacts of the massive and continuing Chinese immigration into Africa. French presents the nature of these impacts locally, as he visits each of these countries: Mozambique, Zambia, Senegal, Liberia, Guinea, Sierra Leone, Mali, Ghana, Tanzania, and Namibia.

His writing style is marked by his approachability, resourcefulness, sense of humour, and obvious good will toward friends and strangers. His speaking knowledge of French, Chinese, and some of the local African languages also opens doors that might have otherwise remained closed to research for his well received books on Africa. On one occasion, he was stopped at a border crossing by a guard who refused to let him pass. After French handed the guard his copy of the New York Review of Books, the guard opened the gate and let him cross.

At other times, he recalls one of those fearless Brits from an earlier colonial time. While travelling with his brother in Namibia in a crowded place, someone tries to rob French’s brother, while the thief’s partner tries to distract French. French and his brother counter the attack and drive off the thieves, after his brother shouts, “Get your hands out of my pocket, motherfucker!” At the time, French himself was carrying $5,000 in cash. On another occasion, he was driving across a deserted area of Namibia when his car blew a tire in the middle of nowhere.  The tire was in shreds, but the inner tube was intact, and without a spare tire, he continued driving on the tube, even crossing a flash flooding area at one point, hoping that the tube would not go flat. It doesn’t.

A million Chinese migrants have arrived in Africa in a mere decade. Many of them hope to build a better life there, and the effect of “chain migration” leads family and friends to follow others who have migrated.  “By century’s end, demographers predict that Africa’s population could reach a staggering 3.5 billion, making it larger than China and India combined.” (p.7).  A number of factors are driving this migration. French interviews one Chinese migrant who says, “China is a big fucking mess with all of its fucking dialects.”

In addition, Chinese corporations are investing in projects in Africa. And working class Chinese are coming with hopes for a better life in African countries where local economies are growing. The promise of land is another lure. Africa may possess “as much as 60 percent of the world’s uncultivated land (p.17). And migration looks promising when widening income gaps in China have made it “one of the most unequal societies anywhere” (p.14). Other reasons that Chinese migrants “move to Africa was a weariness with omnipresent official corruption back home, fear of the impact of a badly polluted environment on their health, and a variety of constraints on freedoms, including religion and speech.” (p.14).

If you decide to read this fine book, I have a suggestion. I found that following French’s journeys on the roads he traveled to various cities, and while he visited dam projects, crossed rivers, deserts, and other landscapes was even more engaging once I started tracking him in a National Geographic Atlas. With an atlas open, you may also look across the Indian Ocean from Africa and consider the journeys of Zheng Hu, who commanded Chinese fleets that sailed from China to the east coast of Africa on at east three occasions in the early 15th century. While reading the chapter on Mail, the longest in the book, I enjoyed listening to music from Mali, especially Boubacar Traore’s deeply plaintive “Diarabi”.

Years ago in North Africa, in the middle of the night, while I was sleeping in the back of a Land Rover with a broken starter, I awoke from a dream. The driver was outside, concluding a trade with a tall Moroccan. We were somewhere up in the Atlas Mountains, under a moonless sky. I was overwhelmed by the immensity of the night, and the dark land stretching away in all directions to the horizons, before it merged with the black sky.  A broken starter or a blown tire wouldn’t phase French.

Africa is a place where bright dreams may come to ruin. Throughout French’s book, he comes upon the remnants and broken dreams of British, French and Portuguese colonialists. Will China’s bright African dreams be shattered and carried away by the shifting sands? The way vast colonial dreams of wealth and a new start disappeared in Rhodesia, Tanganyika, British Somaliland, the Belgian Congo, French Equatorial Africa, Spanish Sahara, Bechuanaland, and other European colonies? Whether China’s dreams succeed or come to ruin, I hope that Howard W. French returns with the story of how it comes to pass. He is a compassionate observer, who listens closely, and presents the telling details so well, that China’s Second Continent is a difficult book to put down. Just try putting it down.

Read more from James Reid at www.jamesedwardreid.ca
Posted by Bookshelf Blogs at 6:21 AM