REVIEW: MOVING FORWARD SIDWAYS LIKE A CRAB by SHANI MOOTOO 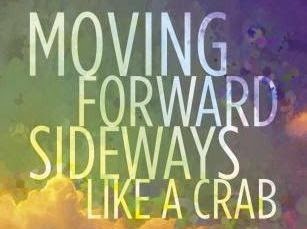 In Moving Forward Sideways Like a Crab, award-winning author Shani Mootoo has written a graceful eulogy to the lost and then found again parent Sydney. Mootoo mines the complexities of familial relationships through Jonathan, once the doted-upon child by his mother Sid (Siddhani), who struggles even as an adult to come to terms with the abandonment he felt as a child when his parents separated and Sid disappeared completely from his life. The struggle continues so many years later when, as an adult, Jonathan reconnects with his parent, and needs to come to terms with his transformation from mother Sid to father Sydney.


The story follows Jonathan as he travels between his home in Canada to visit Sydney who has returned to his own home, Trinidad. Mootoo contrasts the lush, verdant warmth of Trinidad's land and people with the cold concrete of winter in Toronto, the harshness evident in the distance between the people in spite of (or perhaps because of) proximity, with "complicated protocols and rules of conduct" as much as in the physical harshness of a winter that is too familiar to us this year.


Sydney's journals are beautiful, certainly the most eloquent part of the novel. The story cycles through the fateful walk through blizzardy Toronto that changed Sydney's life. Sydney recounts the navigation of his life as an outsider: the immigrant, the artist, the non-biological parent, the non-binary gender identity. His path forward was indeed sideways like a crab.


More than anything else, this is a love story. There is the unspoken connection between Sid and best friend Zain who was the best type of friend, one "who hadn't tried to make him into who he wasn't, but rather helped him become who he already was." The longing Sid has for Zain is palpable; the guilt over a tragedy remains with Sydney for the rest of his life. It is also the love story of a beloved parent reunited with his son, and a son who wants more than anything to understand the choices Sydney made, and to not just accept but honour his memory.

Colinda Clyne began her love affair with books in grade 3 when she read surreptitiously into the wee hours with a flashlight under the covers. She is an educator, a would-be writer, and a foodie. You can follow her @clclyne
Posted by Bookshelf Blogs at 6:44 AM