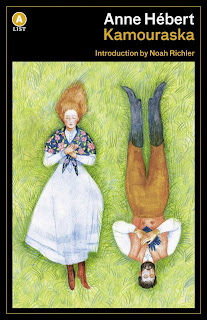 This past fall, Anansi Press did the world a favour by initiating “The A-List,” a series of beautifully redesigned classic publications from their rich and historic backlist. Among them is Kamouraska, Anne Hébert’s dark tale of illicit love, bloody murder, and the strictures of social norms and expectations. 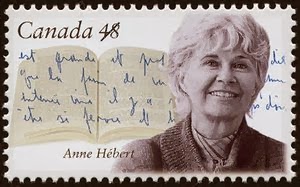 First published in 1970, Kamouraska, set in 19th Century Quebec, is the story of Elisabeth d’Aulnieres, a young, married mother who becomes embroiled in an illicit affair with an American doctor. The murder at the story’s climax is an explosive and bloody collision between a passion unfettered and the family and societal obligations that fetter.

Isolation, as Noah Richler notes in his introduction, of both the societal and geographical kind, is the main theme of the book. It dictates Elisabeth’s choices. The snow, the cold, the whispering neighbours, the long distances between peers and towns, her husband, a drunk and destructive man-child who constantly threatens her with his own suicide, all contribute to her solitude. And thus, her seemingly irrational desire for her exotic lover is in many ways a revolt against this. It was difficult for me not to see the story as an impressionistic portrayal of gender roles, a meditation on what it means when a woman’s options are so few. And while Elisabeth’s crimes are undeniably childish and grave, I couldn’t help but feel for her.

Kamouraska could almost be read as Noir. Collusion, secrecy, societal obligations shattered by careless debauchery, it’s the stuff of pulp fiction. And yet complex. For while Elisabeth’s crimes are obvious it is hard to convict her fully. This moral ambiguity makes for the most compelling of reads as it ultimately forces us to encounter our own morality and values. Heavy stuff indeed. Highly recommended.

Nathan Lawr
Posted by Bookshelf Blogs at 9:26 AM