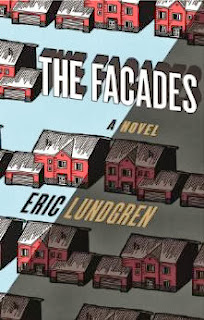 The Facades
By Eric Lundgren

It’s ironic – and scary – that Lundgren published this dystopian novel shortly before Detroit declared bankruptcy, because the world you’ll experience in The Facades is eerily close to Motown’s state of decline, only worse. The story takes place now (or perhaps in the near future) in the fictional city of Trude, somewhere in the American Midwest, and, as part of the rich humour in this book, Lundgren riffs on Trude’s Scandinavian and German background: the surnames, the street names, and the local opera house’s weakness for Wagner.

Disintegration is the theme, and it drives the plot: will Sven Norberg, a mild-mannered legal clerk, find his missing opera star wife, reconcile with his born-again Christian son, and put his family back together? Will he ever understand why it fell apart, like the city of Trude itself? Will he come to understand his own mental breakdown?

The characters, humour, and ideas here gave me a full-bodied read. First, there’s Norberg, who’s a pitiable character, a man who can’t accept his luck in love, when he married Molly, an attractive opera singer. He has reservations about his worthiness, and the public attention that Molly gets irritates him. But when Molly goes missing, the strength of Norberg’s love shows in his dogged tries at finding her. The minor characters – from a cop called “The Oracle,” to a crazy local architect – are perhaps farfetched, but a lot of fun. And while I found the plot to be sometimes dull, humour kept me reading. Wit is everywhere. Reader expectations are often reversed, and Lundgren breaks the conventions of the mystery novel to hilarious effect. The book is a deep read, bringing in psychology, classical music and opera, and the disintegration of the American economy.

So, a multi-layered story. If you’re looking for a challenging – and funny – literary novel, spend some time in Trude. But be prepared to be as disturbed as you are entertained.

Bob Young's short stories have been published in the literary journals Other Voices, Postscripts to Darkness, and Great Lakes Review. Visit his website: robertbyoung.blogspot.ca.
Posted by Bookshelf Blogs at 5:39 AM