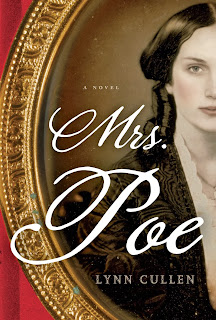 Mrs. Poe is not a biography of Edgar Allan Poe’s wife nor is it a romantic love story. Author Lynn Cullen deliberately planned it that way, leaving the reader to decide on the meaning behind the ambiguous title.

When a newspaper editor advises her to write “shivery tales for ladies,” protagonist Frances Osgood playfully responds, “You’d like me to be a sort of Mrs. Poe.” An acclaimed poet in her own right, Frances had also dabbled in children’s literature. But as the wife of a philandering portrait painter, she could no longer afford that luxury. So, it is not surprising that she welcomes the opportunity to meet the mysterious Poe, if only to help her career. What follows is a flirtation, a seduction, and an illicit love affair.

While reading, I could easily imagine myself sitting in one of those New York parlors, listening with rapt attention to Poe and the other members of the literary crowd, among them, “a Bohemian poetess in her gypsy hoops earrings and loose vest; the elderly Mr. Audubon in his buckskin costume” and “Mr. Walter Whitman, who belligerently wore the long-tailed frock coat and ruffles from an earlier era.” 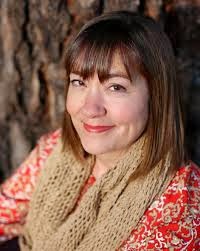 In writing this novel, Lynn Cullen demonstrates superb storytelling abilities and meticulous attention to detail, expertly blending mystery, romance, and history. Where the actual facts are incomplete, she fills in the gaps beautifully.

After retiring from a 31-year teaching career, Joanne Guidoccio launched a second act as a writer. Her articles, book reviews and short stories have appeared in newspapers, magazines and online. Last month, Soul Mate Publishing released her debut novel, Between Land and Sea, as an ebook on Amazon. You can visit her website at www.joanneguidoccio.com
Posted by Bookshelf Blogs at 5:37 AM