Wrong Side of the Law 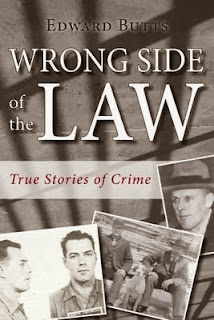 Wrong Side of the Law
Edward Butts

Not since Michael Ondaatje’s The Collected Works of Billy the Kid… Not since William S. Burroughs’ ruminations on outlaws like Half-Hanged Kelly in Cities of the Red Night… And not since Frank Rich’s timeline in The Greatest Story Ever Sold: The Decline and Fall of Truth From 9/11 to Katrina, about the gang who couldn’t shoot straight in the Bush-Cheney White House, have I enjoyed a book about crooks as much as Edward Butts’ Wrong Side of the Law.

Guelph author Butts has collected and colourfully retold true stories of Canadian bank robbers, bandits, and cattle rustlers.  Stories from the days when you didn’t have to be a banker to rob a bank, and get away with it.  When the Wild West operated year round, instead of just during the Calgary Stampede. When the bad guys lit out of town, to lay low, and live off their ill gotten gains.  When men were men, and women wished they’d just shut up about it. When the sentence at the end of the trail for murder was to be hanged by the neck until dead. As one of the 710 executions in Canada by hanging, until they were abolished in 1962.

Their names? Butch Cassidy, Dutch Henry, the Sundance Kid, the Pigeon-Toed Kid, Doc Willis, Red Hyslop and Blackie Lawson. Even the lesser known names have something legendary about them, or at least antic. Butts sorts through the antic and legendary. And when the legends are too great to find clarification, settles for, “Dutch Henry Yauch seems to have been killed several times over.”

The true crime stories here tell of desperadoes who didn’t come to their senses until they were arrested or killed in a shootout with the police. Their crimes took place in Newfoundland, Alberta, Nova Scotia, Toronto, Regina, Montreal, and Guelph. Yes, our Guelph—the kind of city where my birdfeeder was stolen and I thought a crime wave had struck our neighbourhood. 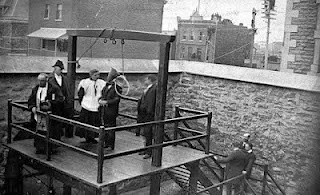 The lives of these desperate men often finished with convictions to hang. My dad remembers the days when these brutal executions took place. Although there were a number of hangmen in Canada, when a hangman arrived in town to carry out the sentence for execution, he came in a car without license plates and was always known only as Ellis. These precautions were to try to ensure that he could not be traced for revenge after he executed the condemned.

Of course it is a good thing that these men on the wrong side of the law were brought to justice. But there is something else about Edward Butts’ recreation of a mostly forgotten time in Canadian history. The stakes were high then, but not as high as they are now. Maybe it’s that the losses were not as great as they are now. And the losses are becoming greater.

Posted by Bookshelf Blogs at 1:07 PM