The Longings of Wayward Girls 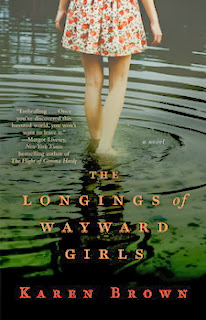 Lust. The instinct to reproduce. It’s our most primal urge (besides hunger). In this novel, Karen Brown meditates on the suffering that goes along with love and lust. This is Brown’s debut as a novelist, but Publishers Weekly named her short story collection Little Sinners and Other Stories as a Best Book of 2012.

Set in an middle-class suburb near Hartford, Connecticut, The Longings of Wayward Girls is a psychological novel. The main character, Sadie Watkins, is a thirty-six-year-old stay-at-home mother of two, and she’s grieving her recent miscarriage. In her undone state of mind, she starts an affair with a new neighbour, Ray Filley, a man she’d last seen twenty-four years ago. She senses that something unseemly happened between her mother and Ray when he was a teenager, and that hunch leads Sadie on a journey toward the painful truths hidden in her fuzzy memories of the summer of 1979, the year she turned thirteen. Sadie calls it “that summer,” when everything changed.

Brown’s powerful technique mesmerized me. First, mirroring the rift in Sadie’s memory, the chapters flip back and forth between 1979 and 2003 (the story’s current time). That structure is a hypnotic device; it drew me into Sadie’s world, in which the past often seems indistinguishable from the present. I got the eerie, dreamlike feeling that the past was living itself over again. Second, beyond its psychological effects, the novel excels at description. Heat, thunderstorms, humidity, children’s dirty feet, birds, and insects (especially cicadas)—Brown describes these things in a way that transported me to the essence of a New England summer.

This is a haunting tale, one that will enchant lovers of psychological suspense.

Bob Young's short stories have been published in the literary journals Other Voices, Postscripts to Darkness, and Great Lakes Review. Visit his website: robertbyoung.blogspot.ca.
Posted by Bookshelf Blogs at 6:58 AM