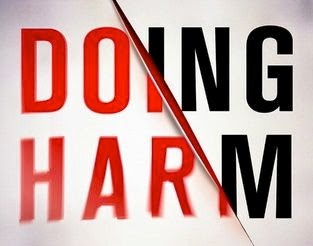 According to Canadian forensic psychologist Robert Hare, one percent of the general population can be categorized as psychopathic.


While most of us think of psychopaths as violent criminals and murderers hopefully behind prison bars, the reality is more frightening. Psychopaths can be found almost anywhere—in our neighborhoods, schools, corporate offices. After reading Doing Harm, I realize their special “talents” could easily find a warm welcome in the operating rooms of our hospitals.


Who wouldn’t hire a fearless, confident and focused surgeon capable of performing well under pressure?


At Boston’s prestigious University Hospital, several top-notch surgeons possess elements of that skill set, among them Chief Resident Steve Mitchell who is happily married and in line for a coveted teaching position. But after two botched surgeries, Steve’s confidence is shaken when he becomes the primary focus of a hospital investigation. This nightmare takes a horrific twist when Steve finds himself in a compromising position with a psychopath who is deliberately killing patients.


I was both fascinated and repelled by the psychopath’s ability to effortlessly wear that mask of sanity while plotting to kill. When confronted, she can even justify her actions: “I might fall somewhere along the antisocial-personality-disorder spectrum. But I want to fix things. I’m one of the good guys.”


Author and board-certified urologist Kelly Parsons has succeeded in crafting a well-placed thriller that is almost impossible to put down.


After retiring from a 31-year teaching career, Joanne Guidoccio launched a second act as a writer. Her articles, book reviews and short stories have appeared in newspapers, magazines and online. In September 2013, Soul Mate Publishing released her debut novel, Between Land and Sea, as an eBook on Amazon. You can visit her website at www.joanneguidoccio.com


Posted by Bookshelf Blogs at 6:54 AM