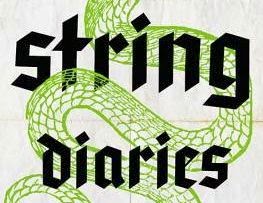 Thrillers are awesome. Mythology is cool. What do you get when you combine the two? Something very special indeed. This is Stephen Lloyd Jones’ The String Diaries, a new take on an old story – that of an obsessed murderer and his terrified prey. In this case, the hunter has one advantage – he can shapeshift.

I love the concept of shapeshifting. It's been around as long as humans have been capable of telling stories, and it has taken a variety of forms throughout the ages. It's wonderful in that it's innately terrifying. Few things have aged so well. At the root of this horror is the concept Jones' novel explores most: the fact that with a shapeshifter after you, you can't trust anyone. This is a special kind of seclusion – if anyone around you could be your enemy, how do you know whom you can trust?

The book follows a family in modern day Wales desperately running from a shapeshifter who has been hunting them for generations, but it also goes back through decades to show the events leading up to it. This is kind of storytelling allows exposition to flow through nicely without interrupting the adrenaline-fueled pace of the present tale.

My one complaint with this book is the ending. It felt like the author picked up all the leftover bits of the story and tried to cram them all together into the last few pages and arbitrarily switching from mood to mood. I felt it could have benefited from being more drawn out to allow things to take more time, but the rest of the novel is a solid bulwark on which the ending can rest nonetheless.

It's been a long time since I've sat down with a book and read it with no interruptions or breaks. It's a time I've missed, and I'm thankful to this book for recapturing it. My congratulations to the author.

Robert Green is a confirmed bibliophile and aspiring writer whose love of sci-fi has caused him to own many more books than he has physical room for. He is also the owner and creator of the up-and-coming company Verity Books, which can be seen at various cons throughout the year. Any questions or comments can be sent to veritybooksanddvds@gmail.com or facebook.com/veritybooksanddvds.
Posted by Bookshelf Blogs at 6:53 AM