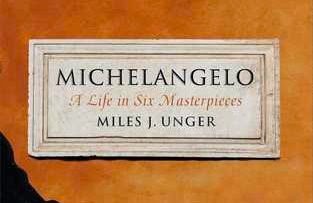 Who was the first creative genius? It’s a tall order, but Miles J. Unger thinks it just might be Michelangelo. Michelangelo: A Life in Six Masterpieces is Unger’s compassionate, honest, and playful portrait of the great artist. It’s hard to imagine anyone who isn’t acquainted with Michelangelo’s work on the ceiling of the Sistine Chapel or his statue of David, but what is it that makes him so special? Unger’s book illuminates the life and work of the great artist, at once imaginative and impeccably researched.


Exploring the art itself and first-hand documents of the era, Unger delves into the mind and soul of the great artist. Who knew Michelangelo was such a prolific poet, for instance? Through his snail mail correspondence, confessional sonnets, and recorded public events of the era, we get a front-row seat to witness the mind and artistry of the artist. Unger reveals Michelangelo’s stressful familial situation, homoerotic tendencies, tortured feelings of being misunderstood, and the frustration of his vision with the often irritating setbacks of reality in striking detail.

Largely, we learn that Michelangelo’s genius is evident in his ability to make a statement through his unusual and controversial portrayals of religious figures and themes in his work. Unger captures Michelangelo’s towering artistic achievements, through which he made immense spiritual, emotional, and intellectual innovations. Who could better explain the strange detachment of the Virgin Mary in Michelangelo’s Pietà or the genuine terror of the Last Judgement? Interestingly enough, the lives of popes in Michelangelo’s long career plays a large part in both his life and the book. Although the historical background is critical in understanding Michelangelo’s greatest commissions, it can make for a long and complex read at times. However, it all is so necessary in understanding one of the art world’s undeniably brilliant minds. Ultimately, Unger’s mastery of the epic scope of Michelangelo’s life and opus is an achievement itself, as breathtakingly skillful and probing as Michelangelo’s work itself.

A man whose work encompassed sculpture in bronze and marble, painting, architecture, and more – Michelangelo’s relentless ambition, obsessive vision, and visceral talent are undeniable. Yet, it takes another kind of ambition, vision, and talent to grasp and divulge the enigmatic truths of this great artist. Miles J. Unger is more than equipped to this task. Unger’s understanding of Signor Michelangelo is uncanny and moving. It is an exploration of the great Michelangelo Buonarroti of course, yet also of power, creation, and art itself.


Why did a young boy born in 1475 have the compulsion to create? How does art created half a millennium ago still move, inspire, and awe us today? Perhaps because it was destiny that Michelangelo was born to create, and that Mr. Miles J. Unger was here to help us understand its mysteries and revelations.


Mike Fan is a Canadian classical baritone. Mike plays five instruments and speaks three and a half languages. He holds degrees in piano performance and biomedical science, but it was obvious from an early age that music would win out. On the literary side, Mike wrote 365 sonnets in his teens and writes for his poetry blog http://someturbidnight.blogspot.ca. Follow @MikeZFan for Mike's adventures, musical and otherwise.
Posted by Bookshelf Blogs at 5:39 AM