The Impossible Knife of Memory 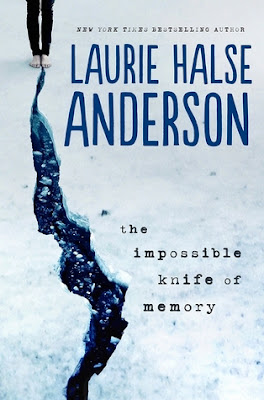 Seventeen-year-old Hayley has been travelling with her father Andy for years now; when they finally settle down in her late grandmother’s house, his memories have a chance to catch up with him. Andy is a war veteran scarred and damaged by his experiences, and Hayley’s upbringing has left her with scars of her own.

Andy: Odysseus had twenty years to shed his battle skin. My grandfather left the battlefield in France and rode home in a ship that crawled across the ocean slowly so he could catch his breath. I get on a plane in hell and get off, hours later, at my home.

Anderson’s characters are vivid and real, and as always, she isn’t afraid to tackle difficult subject matter. In this book, it’s Andy’s PTSD and substance abuse, and Hayley’s learning how to cope with that and when to ask for help. Who to push away and who to hold close. None of the decisions are easy, and nothing feels pat.

It sounds dark, and while the book does go to some dark places, there’s lightness in there too, with funny banter between the characters and a great, believable teen voice.

Hayley: You know how some babies are blessed by good fairies when they’re born, fairies with names like Beauty and Brains and Kindness and Laughter? I was blessed by their evil underworld troll cousins, Gawky and Awkward. I stared at him and my troll fairies whacked me upside the head with their pointy wands, making me spectacularly… gawkward.

Strong writing, a resonant story and characters you’ll be thinking about long after you’ve closed the book combine to make Anderson’s The Impossible Knife of Memory a great read for teens and adults.

Erin Thomas writes (and reads!) books for kids and teens from her home in Whitby, Ontario. For more information, visit www.erinthomas.ca.
Posted by Bookshelf Blogs at 10:26 AM