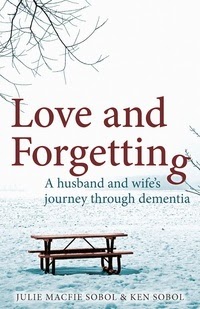 Love and Forgetting: A Husband and Wife’s Journey Through Dementia
By Julie Macfie Sobol & Ken Sobol

With an engaging opening paragraph in a recent column for the Toronto Star, Rick Salutin brought this book to my attention: “At a midpoint in the progress of Ken Sobol’s dementia, his wife of over 40 years, Julie, said: ‘You know it occurs to me there can’t be many people in the world who are writing partners with someone who has dementia.’”

The Sobols were American expatriates who moved to Canada in 1974 because it was a good place to live. They were both writers—Ken had spent 15 years with The Village Voice, when it provided fertile ground for young writers like Manohla Dargis, who now writes for the New York Times, and Peter Schjeldahl, now writing for the New Yorker. In Canada, Ken continued his writing career for a number of years, working for TVO and Elwy Yost’s enjoyable Saturday Night at the Movies. 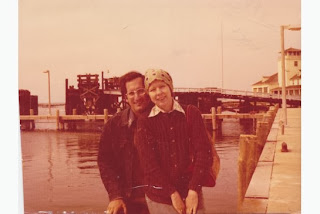 Ken Sobol begins to exhibit a few mild symptoms at first, such as forgetfulness. Then the symptoms begin to cascade: unfounded fears, staring, nightmares, irrational thinking, tremors, and he begins shuffling instead of walking. As the symptoms worsen, the Sobols visit a number of doctors in attempts to find the cause. Finally, Ken is diagnosed with Lewy Body Disease, a little known condition. It is, however, the second most common form of dementia, after Alzheimer’s.

Eventually Ken is no longer able to write, and Julie continues the story of how Lewy Body Disease slowly devastates her beloved husband’s health. She describes in vivid detail how trying and difficult it is for her to care for him. He hallucinates people in the house who are trying to harm him. He disappears from the house at night. When the situation at home becomes impossible, she describes how difficult it is to find a place for Ken now that he can no longer live at home. At this point in the book, I became deeply thankful for our Canadian health care system. If the Sobols had remained in the United States, it is unimaginable what they would have had to deal with in the American health care system. Notwithstanding Barack Obama’s unfairly maligned attempts to fix it.

If you have ever cared for someone you loved, as they were dying, or if you have aging parents who now need your care and assistance, or if you have accepted that you may be dealing with some of these difficulties yourself, Love and Forgetting is a good guide. It provides a thoughtful and touching example of some of the humour, difficulties, joy, and grief that may accompany what we all will experience—unless we’re hit by a bus. The Sobols’ book is a bracing and deeply moving story. May we all have the love and compassion the Sobols exhibited, in order to deal with whatever inevitabilities we will face.

http://www.jamesedwardreid.ca
Posted by Bookshelf Blogs at 7:41 AM