Smarter Than You Think 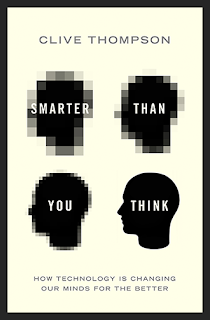 Smarter Than You Think
by Clive Thompson

Predicting the future is a strange thing. No sooner do new developments in technology (or anything else, for that matter) arise, than they're accompanied by an entourage of talking heads forecasting either a glorious new dawn or total societal collapse, depending on which channel you're tuned to. In Smarter Than You Think, Clive Thompson takes an optimistic view of the digital technologies of the past two decades. By complimenting our uniquely human faculties, he believes that they may offer us solutions to problems that have long troubled us, and expand our capabilities beyond previously assumed limits.

I was initially concerned that STYT would be a light-weight version of the heady and analytical book by Nick Harkaway, The Blind Giant, especially when Thompson declares that despite the book's subtitle of “how technology is changing our minds for the better”, he decides to wilfully exclude any mention of neuroscience or brain imaging. However, my fears were revealed to be unfounded: not only does he competently defend his decision, but in being selective about the domains addressed, he frees up additional space for in-depth analysis of the societal application of these technologies, rather than parroting a list of contextually divorced lab studies. STYT makes a point that I feel many social commentators miss: technologies (whether paper, pens or the information-sifting chimera that is Google) are tools. It is in our application of them in our daily lives that we derive their positive or negative effects. 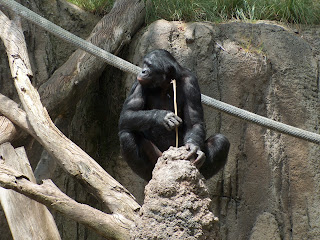 In defending this thesis, Thompson draws from a wide array of examples. Some of the most interesting include the usage of programming classes to teach children logical thinking, and to demonstrate the underlying principles of mathematics in a more concrete and meaningful way. Here, the children are shown in real-time how the modification of different variables (in the form of a simplified coding language) create different results on-screen. They guide a small turtle around via the functions students input, and as turtle draws a line (much like an etch-a-sketch) behind it, different inputs will create different “flight paths”, resulting in different pictures. I, for one, wish that these innovations had been around when I was in elementary school.

Examples such as this abound, including the Internet's capacity for creating an ambient awareness of global events, allowing for sociopolitical action on a number of different scales at a speed scarcely fathomable before the information age; the proliferation of smartphone cameras forces accountability on normally unwilling police forces and politicians, for fear that Big Brother is being watched with just as much vigilance by his younger siblings. In all honesty, the book's subtitle may be inaccurate, as Thompson's arguments show that rather than changing the way that our minds work, technology is allowing us to make the most of the cognitive resources we already possess. With the staggering array of tools at our fingertips, the challenge now is to develop the skills to know which is the best to use for a given task. Rather than blaming the tech that we currently use, Smarter Than You Think places the responsibility on our shoulders. It’s up to us to pick the right tool for the job, even if our eventual choice is to forgo modern tech for simpler, analog methods. It is for this shift in perspective, as well as the fair-minded discussion of issues surrounding the development and usage of new machinery, that I believe Smarter Than You Think makes a great addition to any bookshelf.

Vincent Smith is a taoist, aspiring writer, and dyed-in-the-wool psychology geek at the University of Guelph. You can find his writing on video games, comics, movies, and all things geek over at The Rogue's Gallery.
Posted by Bookshelf Blogs at 7:26 AM